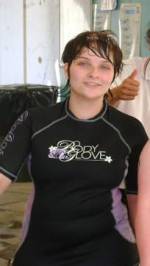 It hasn’t been an easy journey for Fi diagnosed at birth with Spina Bifida, the physical complications Spina Bifida afflicts upon her life make every day activities challenging.

But Fi is a fighter, and through her own determination and the support of a strong ‘team’ , her family, her home-helper Marcia, physiotherapist Anne Pierce, and Green Prescription Active Families (GRx/AF) Manager Tania Lardelli Fi’s life has improved dramatically.

2011 was a particularly challenging year. At age 14 Fi developed a life-threatening illness that resulted in her spending a number of weeks in both Waikato and Gisborne hospital. This time in hospital care, threatened her physical capabilities massively. In Fi’s initial out-patient assessment, she could not walk unassisted for even 5 metres, most often travelling in a walkchair, or at the least, supported with a zimmer frame.

Fi and her mother say physio Anne Pierce, and GRx/AF’s Tania Lardelli’s support and encouragement has been instrumental in Fi’s development. Tania has developed a full and varied activity schedule for Fi by creating real-life applicable targets that also meet the physical goals that Pierce is also setting for Fi. Tania’s targets are around ‘normalizing’ Fi’s life, setting targets that support independent living.

The first target Tania set for Fi was to walk from home to the nearest round about approx 500 metres, this target took 5 weeks to achieve. Now she has achieved her second target walking the three bridges, an approximate 1km loop. Since this story was written Fi has conquered the ultimate challenge of walking over Kaiti Hill. These walking activities have given Fi a sense of independence and have assisted with her street safety.

Working out at the gym is another regular activity. Fi and her mother are gym buddies, frequenting their local gym ‘Outlines’ together. They each have their own circuit, coming together when Fi needs Kim’s support for some leg exercises, however Fi is now strong enough to complete her gym routine by herself with no assistance required. Fi has struggled with balance, but this has improved dramatically over the last few months because of the core strengthening exercises, this has helped her achieve targets such as hanging out washing, and standing in front of the oven to cook basic meals.

Fi’s mum Kim describes home-helper Marcia, as “the salt of the earth”, someone who has the ability to bring out the “true nature” of Fi sometimes hidden behind the usual teenage angst and anger. Marcia has seen massive change in Fi’s attitude “she use to be a passive observer” but now Fi is finding joy in physical activities like swimming. In January 2012, after a life time of loving being in the water, but having limited skills, Fi is now swimming 100m unassisted and also learning to dive, a year ago, she could hardly swim 10m. In a year that has been marred by illness, hospital visits, and some life-threatening challenges, Fi rates this achievement as her highlight.

Kim says “2011 was a hard year, but very positive too because of the right support and access to the right resources”. Progress inspires Fi to continue working hard. Tania and Anne discussed with Fi and her family to relinquish her wheelchair when at school. Fi was unsure of this task but has not used a walking aide or wheelchair at all this year which is another testament to her determination.

Kim says meeting adults, professional adults, with disabilities gives her hope for Fi’s future. She also says she feel’s Fi is a role model for other youth with and without disabilities. Fi works hard to live a ‘normal’ life and that is inspiring. Fi’s future aspiration is to go away to university to study physiotherapy inspired by the care she has received. Tania says Active Families is confident in Fi’s ongoing progress because of her strength and ambition for the future.