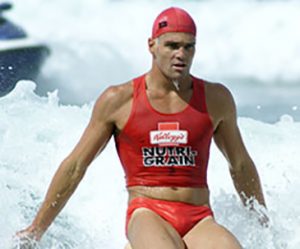 Cory was born in Gisborne in March 1972. His secondary education was at Gisborne Boy’s High School. Cory was the younger son in a family passionate about life – surfing and his involvement with the sport had begun by the time he was five years old. He soon started to compete in Nipper’s carnivals and competitions on Gisborne’s beaches. His great commitment to his sport was constant. As a member of the Midway Surf Life Saving Club he competed all over New Zealand throughout his school days. Gradually he moved towards specialising in Ironman competitors and his favourites within that discipline are the sprints and board events.

Cory has been a professional athlete for more than a decade. He has won numerous national titles. The National Ironman title has been his every year for ten years. He has represented New Zealand many times, both as an individual and as a member of the national team, adding international titles to his impressive haul. In the summer of 2001/2002 he has again been a member of the New Zealand Makos team in the prestigious Kellogg’s Nutri-Grain Surf League in Australia.

A few years ago, because of illness, Cory was told he would never race again. The ultimate challenge for Cory is the World Ironman Championship. He came second in the competition in 1994 and 1996 and then won the world title twice, in 1998 and 2000. The event is held every two years and he will defend his title this May, in America.

Apart from the hard slog of training and travelling the world to compete in Ironman contests Cory is also a Surf Ambassador for Surf Life Saving New Zealand. This involves travelling the country coaching or delivering workshops as required by the various districts.

Furthermore he is a Secondary Schools Sports Ambassador for the Hillary Commission, whereby he delivers workshops on such ideals as goal setting and motivation.

Cory is married and has two children. Mount Maunganui is now base in New Zealand.