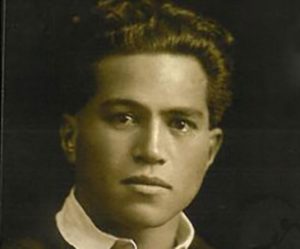 art of the Pride of Gisborne’s “Famous Faces” collection, 2002

George Nepia was born in Wairoa about 1907. He attended Wairoa Primary and Nuhaka Native Primary Schools, then worked, saving money for boarding school. Destined for Te Aute College, he enrolled himself at the Maori Agricultural College near Hastings against his father’s wishes.

George played rugby for East Coast Districts in 1921 and for the legendary 1922 Hawke’s Bay team. He was then selected for the 1924-25 All Blacks overseas tour and played fullback in all 32 games in the British Isles, France and Canada. The team won every match and was dubbed The Invincibles.

Controversially not selected for the All Blacks 1926-27 world tour, omitted from the 1928 South African tour because of his race, Nepia played in the 1929 Australian tour. Unable to play beyond the first test because of injury, he became noted for his charm and singing. In 1930 Nepia played all tests for New Zealand against the touring British Isles team. In all he played 46 matches for the All Blacks, scoring a total of 99 points.  In 1935 Nepia captained the New Zealand Maori team to Australia. For financial reasons he then switched to professional rugby league in Britain.

Homesick, he returned to New Zealand in 1937.  A 1947 sports amnesty meant Nepia could return to rugby union. In 1950 he led the Olympians Club against Poverty Bay, which was captained by his son George – the only occasional when a father and son have played against each other in New Zealand first-class rugby. Nepia also became the oldest New Zealander to play a first-class game.

In 1982 Nepia travelled with the New Zealand Maori team to Wales, where his reception at the St Helens ground in Swansea was an incredible mark of homage to him. In 1986 the South African Rugby Board elected him life vice president. He was also the subject of New Zealand television’s This Is Your Life.

His eldest son, George, was killed in active service in Malaya in 1954 and Huinga died in 1975. George Nepia died in Ruatoria in August 1986. Two sons and a daughter survived him.