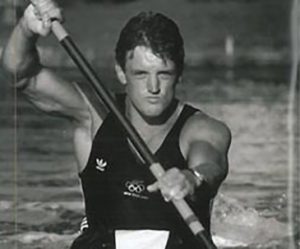 He swam competitively from an early age and represented Poverty Bay on many occasions throughout his schooldays. He also became interested in surf lifesaving and in 1976 he joined Gisborne’s Waikanae Club.

Grant represented the club in national competitions from 1976 to 1989 and also represented New Zealand from 1980 to 1987.

He was New Zealand Ironman Champion in 1985 and 1989 and he won numerous other national titles over years, both individually and as part of a team.

In those years Grant also developed a passion for kayaking and paddled for New Zealand from 1983 to 1988. He competed in four world canoeing Championships and two Olympic Games.

The most memorable sporting occasion in Grant’s life was winning a gold medal in the K4 1000m at the Los Angeles Olympic Games in 1984. Another highlight of his sporting achievements was coming third in the World Championships K1 10,000m in 1985.

Training in Gisborne in the 1980s was a challenge in itself. Facilities were basically non-existent and in the early days Grant did not even have a coach. At the time New Zealand was virtually unknown in the sport of canoeing.

Grant is married and has four children.

He still paddles recreationally, has an administrative role in the Poverty Bay Kayak Club and coaches youngsters in the Waikanae Surf Life Saving Club. He has a great interest in natural medicine and sports nutrition and he is the third generation of Bramwell chemists to run a local pharmacy.