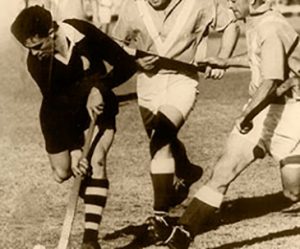 Inducted into the “Tairawhiti Legend of Sport” Hall of Fame – 2011

Guy Dalrymple McGregor, born on 11 July 1930, showed early natural talent as a rugby player but during a game at the newly opened Gisborne Intermediate School in 1944 he suffered such a severe injury to his kneecap that the surgeon advised against playing rugby again. The next year, as Guy entered secondary school, rugby’s loss became one of NZ Hockey’s great gains.

During his years at Gisborne High School, Guy proved to be a skilled cricketer as well as hockey player. As a 4th Former was a member of the school’s 1st Hockey XI, he was in both 1st XI Cricket and 1st XI Hockey by his 5th Form year as well as being a member of the Poverty Bay Representative Hockey team which played Canterbury for the national provincial trophy.

In his final school year in 1948 he was Captain of both 1st XI’s, again represented Poverty Bay and was selected for the NZ Secondary School Hockey team. A leading role in the development of his ‘superior trademark stickwork’, in later years was played by his High School 1st XI coach, the sometimes irascible teacher, George Langhorne, whose early upbringing in India led him to forcefully emphasise the “Indian way” of skilled stick work and controlled passing.

Following school, Guy went on to gain a Phys. Ed degree from Otago University before following a teaching career, including a brief stint at Gisborne High School and finally ending as the head lecturer in physical education and health at Auckland Teachers’ College. Over that time, he went on to represent South Island Universities, Otago, Auckland and NZ Universities before his first selection for New Zealand versus Australia, whilst teaching at Gisborne High in 1952.

In 1954 he was selected to tour Australia. Guy was clearly the team’s leading goal scorer on that tour of 22 games. When the Test series brought a NZ victory after a lapse of 17 years, a report noted that, “Guy McGregor, centre forward, excelled in stick work while his generalship in the line was outstanding despite close marking.”

Guy was a member of the first NZ Hockey team to attend an Olympic Games in Melbourne, 1956, The team set an Olympic record in post-section play when they annihilated Singapore 13-0, with Guy scoring 6 of those goals. New Zealand’s final placing of 6th in the tournament showed they deserved a position on the world stage.

Guy was back at the Olympics in 1960, at Rome. The New Zealanders were promoted to the quarter finals, having been placed 2nd in their group pool of India, Denmark and the Netherlands, but were beaten 0-1 by Spain. In the first play-off for 5th and 6th Guy scored the winning goal v. Germany which led to a final round and a 1-0 victory over Australia. 5th placing meant the team had surpassed their 1956 result. Guy’s two Olympic teams had started NZ Hockey down the road to the gold medal that was achieved at Montreal 20 years later.

Guy and his wife Val live in Auckland where he continues to show prowess in hitting a ball. To date, he has achieved 6 holes-in-one on the golf course.