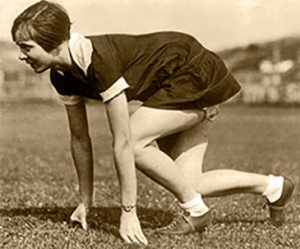 Born in Gisborne on 11 December, 1909, by the age of 18 years Norma Wilson was recognised as the Dominion’s greatest woman track athlete, dubbed “New Zealand’s Lady Flier” by the media, and the first woman athlete to represent this country at an Olympic Games.

As a member of the Gisborne Amateur Athletics Club she was coached by Bob “Snowy” Thompson, but it is generally agreed that the amazing times she recorded in her track sprinting career owed more to tremendous natural ability.
She twice equalled the, then, world 100 yards record of 11.2 seconds, once at the Childers Road Reserve and once at the Basin Reserve, Wellington, but on each occasion the track was measured at 7 inches short. Later, at an invitation meet, she covered the 100yards in 11 seconds flat but, here too, no record could be claimed as it was on a sloping track.

Upon winning the 1927 “NZ Ladies 100 yards Championship” Poverty Bay sports writer, Wally Ingram campaigned for her selection for the 1928 Olympic Games at Amsterdam. The lack of opportunity to train during the long sea journey to Europe, the fact that the team management tended to take little interest in the training of women members (a reflection of gender attitudes of the period) and unfamiliarity with cinder tracks did not stop her from reaching the semi-finals of the 100 metres only to encounter misfortune. She was initially left at the blocks when a second false start was allowed by a Starter who was subsequently replaced and hooted from the field. Witnesses, including some of the official judges, placed her at second equal but the principal judge ordered a third placing which meant failing to qualify for the final.

Her running in England, following the Games, was first class. She won several invitation events against international fields, including a 120 yard race in 13.5 seconds – a world record for a grass track. Back in New Zealand she failed to gain the victory dais at the 1929-30 NZ Athletic Championships but returned to competition in 1933 to retake the title from Thelma Kench, the women’s champion over the previous three years.

A woman columnist of the day described Norma as “very winsome and very far from the ‘hard as nails’ type of woman athlete.” Nevertheless, away from the track she could reveal a determined and uncompromising side to her character. At a 1928 parliamentary reception following her return from Europe, whilst insisting that NZ needed cinder tracks in the main centres she referred to attending Olympic officials as “stuffed shirts.”

Later, she instigated a revolutionary change for women’s athletics when she refused an invitation to run at the Basin Reserve unless she was allowed to run in shorts as was overseas practice. After that time all women wore shorts.

In 1933 Norma married Ted Morgan, NZ’s only gold medalist Olympic boxer, but later they divorced and she married jockey, Rangi Marsh, and lived in Hastings till she died at the age of 90 on 10 July 2000.