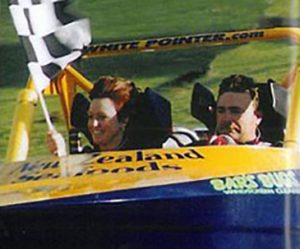 Born in Gisborne in 1958, Peter attended Patutahi Primary and Lytton High schools, after which he qualified as a fitter and turner.

In 1981 he moved home to Patutahi to work for the family’s horticultural property and contracting business. He played club rugby for Ngatapa.

He was always interested in motor sport and in 1985, purchasing a jet boat for water-skiing, he was introduced to the fledging sport of jet sprinting. He became actively involved in the sport, his boats quickly evolving into purpose-built ones using automotive Chevrolet engines, generally 350 horsepower Chevy engines.

Peter’s competitive nature and his interest in mechanical challenges have led to him succeeding in jet sprints at the highest level. Competing in Australia, America and New Zealand he has won every major title in the sport, including North Island Champion, South Island Champion, New Zealand Champion, USA Champion and World Series Champion twice. Peter was particularly pleased to win the 2001 Air New Zealand Eastland Sportsman of the Year.

Peter recognises that this was made possible by a team effort and support form his family. He still farms, and the business has allowed him time to prepare his boat and travel. His navigator is his partner, Robyn Fox; her major role being to ensure that they stay on track, which is rather difficult at speeds of up to 140 to 150 kilometres per hour.

Peter intends to jet sprint as long as he has a burning desire to compete. He still has goals to achieve and places to visit. Through jet sprinting he has met many fine people around the world and he has a huge and satisfying interest outside of work. Peter states: “it has taught me how you CAN succeed and reach your goals with commitment and this is in turn generates huge satisfaction. Many sacrifices have been necessary over the years to achieve what I have, but as in many things through our lives, we also have choices”.