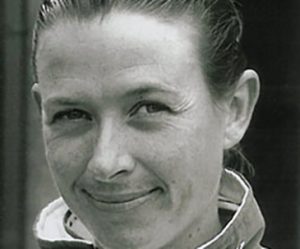 Sandra Edge was born at Te Puia Springs on the East Coast in August 1962.

She was educated at Tokomaru Bay on the East Coast, Havelock North in Hawkes Bay and at Lytton High School in Gisborne.

She then qualified as a School Dental Nurse. She followed this career for some years, and has also been a bank officer, a regional netball coordinator and a physical education teacher.

Sandra’s huge talent in netball resulted in her first representative appearance in 1979, while still at school. Her great skills, particularly in centre-court play, ensured she was subsequently selected to play in the New Zealand national team.

She played for the Silver Ferns from 1985 to 1991 and from 1994 to 1995. During those years she also represented the provinces of Poverty Bay, Wellington, Waikato, Southland and Auckland, as well as New Zealand.

She was a member of the New Zealand team, captained by Leigh Gibbs, which won the World Tournament in Scotland in 1987. Sandra, herself, captained subsequent Silver Ferns teams in 1994 and 1995.

Called by many sports journalists and coaches the world’s best centre-court player, Sandra won respect for both her natural ability on the court and her unfailing good humour and friendly nature.

A book has been written about her called Full Circle, by Joseph Romanos.

Sandra has continued her involvement with netball by coaching local players at several levels.

She is married, has two small sons and she lives at Wainui Beach Gisborne.